Outbuildings at the Museum

The Lexington County Museum features many historic outbuildings that are representative of those that would have been found on farms and plantations in the nineteenth and early twentieth centuries.  Here is more information on some of the outbuildings.

The kitchen was where food was prepared and where African-American slaves working within the main house and yard obtained their meals. Because of the heat from the fire and the danger of fires, kitchens were always separate structures from the main

house.  The kitchen at the Lexington County Museum, along with several other outbuildings, was originally located in Batesburg, SC and was owned by Joel Ridgell, who was the brother-in-law of John Fox.

Summer and Winter Dairies
The dairies were used to keep milk, butter, cream, and cheese cool until they were needed.  During the summer, milk and dairy products would be placed in around 8 inches of water in the summer dairy to keep them cool.  The winter dairy has an open-slatted front to allow the cold wind to blow through and cool the dairy products. 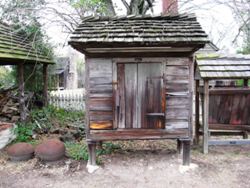 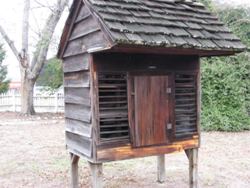 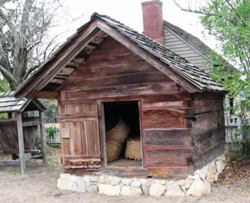 As the name implies, the potato house was used to store sweet potatoes as well as other fruits and vegetables such as onions, pumpkins, and apples.  The house provided protection against the weather and pests.  To further protect the fruits and vegetables, the walls were sealed with red clay.

The smokehouse was an important part of any plantation or farm.  It served as a place where pork, an important part of the diet of southerners, could be stored and preserved.  Pork products would be packed in salt after butchering in November.  The pork would then be hung in the smokehouse over a pan containing a slow, smoking fire to preserve and flavor the meat.  Because the meat was stored in the smokehouse, the door was kept locked at all times to prevent theft.  The Lexington County Museum’s smokehouse was another outbuilding from Joel Ridgell’s plantation in Batesburg. 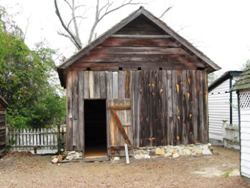 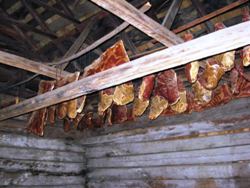 The privy (called an outhouse today) was the toilet for the household.  The privy at the Lexington County Museum features three circular holes for people to sit on.  Because of the prevalence of food poisoning, more than one person may have needed to use it.  Corn shucks or lamb’s ear would be used as toilet paper. 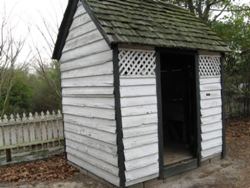 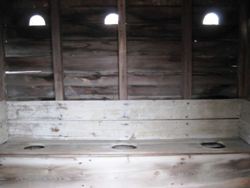