Built around 1815, this building is typical of the field schools common in South Carolina before the Civil War.  These buildings were often called field schools because they were usually constructed in worn out fields no longer used for crops. 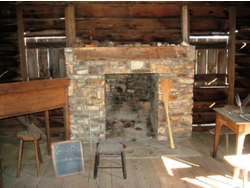 This particular school was originally located just off Highway 1 and Oak Drive in the Oak Grove area around four miles east of the town of Lexington.  The building was used as a barn after a new school was constructed in the 1880s.

Teachers at this school would have been male until after the Civil War. Ten to twenty-five students, ranging from age 7 to 14, would have attended the school at one time.  Slaves were not educated at all and not allowed to attend the school.

The school schedule was determined by the agricultural seasons, as children were needed to help with the planting and harvesting of crops.

This schoolhouse was donated and moved to the Lexington County Museum in 1984.