This circa 1800 manor house, once headquarters of a thriving plantation and mill seat, is an outstanding example of Federal style

architecture popular just after the American Revolution. Beaded weatherboarding, Chippendale porch railings, under-eave dentil molding, brass appointed door locks, and paneled overmantel are features amazingly intact after over 200 years. Some original shutters, hand blown window glass, white chimney bands, and locally made hearth tiles also attest to the attention to detail, style and workmanship of that period by the builder. The diagonal pattern in the bricks of the main chimney is the last remaining example in the county. 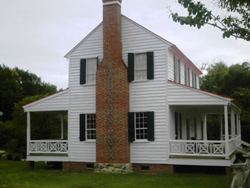 Initially constructed as five rooms, the house was enlarged with two additional rooms on  the east end, perhaps to accommodate the 1820's change in fashion which divided dining and living space in specific rooms. Built entirely of heart yellow pine, the wooden structure of the house clearly shows the hand planed boards cut with a water powered vertical saw, probably at the Leaphart’s own saw mills. The roof was first shingled with wooden shakes, but since about 1920 has been covered in sheet metal.

In its 200 year history the structure has been home to only two families, each with its own historical experiences. The house and its resident families have been witness to many cultural and economic changes which reflect the history of Lexington County.

Hwy 378 and Corley Mill Road. Early maps indicate the house originally faced North across the wide Saluda River Valley. Later modification made to the roads caused reorientation of the front to the other side of the house. By 1820 George had amassed a plantation of around 1,400 acres of land by inheritance, marriage, purchase, and state grants. He also owned a large grist and sawmill on 12-Mile Creek. The mill with its dam and impoundment of water are shown on Robert Mills' map of Lexington District in 1820. The mill was so important to the surrounding countryside that the old road from Columbia to the new courthouse town of Lexington was called "Leaphart’s Road.” Today, Leaphart Street and Leaphart Road in West Columbia are remnants of the original route.

George Leaphart was a commissioner of the Saluda Canal after 1825, and after 1826 was commissioner of fisheries on the lower Saluda River, an important business at that time. By 1850 he owned over 30 slaves, some of them experienced millers. Others were employed on the plantation growing cotton, corn, sweet potatoes, livestock and other food products, as well as providing domestic staff for the main house. An outside kitchen once stood some 50 feet east of the dwelling and was probably the reason for steps at the end of the porch that gave service access into the dining room. The Leapharts and several of their slaves were members of Mt. Hebron Methodist Church. 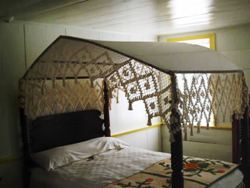 George and his wife Catherine both died in 1850. Five children survived them: Simon, Martin, Mary (Polly), Sarah, and Jefferson Leaphart. John Fox was administrator of the complicated estate settlement which continued for years. Simon, Polly and Martin were dead by 1860. In February 1865 a contingent of Gen. W.T. Sherman's Federal army camped all around the plantation, devastating the neighborhood and damaging the house. The mantel shelf in the parlor was shattered by an officer angry at the slow response to his commands by one of the house servants. The war wrecked the family's finances, and after several lawsuits involving debts the property was sold in 1896. 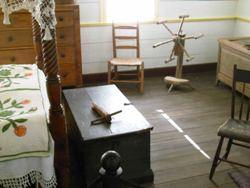 James Harman, DDS, (1848-1928) grew up near the Saluda River some ten miles west of Lexington. A graduate of the University Of Tennessee School Of Dentistry, he practiced in the town of Lexington where he bought several business properties. In 1896 he purchased much of the old Leaphart plantation and made it his home. With his wife, Susannah George Harman, he operated a large farming operation, employing several tenant families, as well as numerous business enterprises. Three children were born to the Harmans: (Mrs.) Elizabeth Whitworth / Areheart, (Mrs.) Queenie Gantt, and James Dedrick Harman who inherited the place upon his father's death. The Harman family were active members of nearby Zion Lutheran Church.

Dedrick Harman (1900-1970) and his wife Irene Kleckley Harman continued farming part of their lands. Like his father, Dedrick had other business interests as well. Several large rooms were added to the rear of the house in order to bring inside such modern conveniences as kitchen and bathrooms. The Harman family kept the old front portion in good repair, and did not destroy the original fabric or alter the room configuration. Dedrick and Irene reared five children in the house: Ethel, James, Samuel, Harriett, and William Harman. Upon the death of their mother in 1997 and development of the farm into commercial tracts, the family donated the old manor house to the museum so that its historical and architectural integrity would be preserved and maintained.

With its modern additions removed, the upper story was cut horizontally from the lower floor, and in two sections the house was moved up US 378 to Lexington at 3 a.m. in the morning of June 11, 2003. After exhaustive research and evaluation, restoration of the house was begun in 2005 and completed in 2006 with the professional assistance of architect Steven K. Smith, AIA of Camden, SC.