The Hazelius House, originally located where BI-LO is on Hwy. 378, was a part of the Lutheran Theological Seminary.  It is also listed on the National Register of Historic Places.  The central part of the house was built by the Gross family sometime before 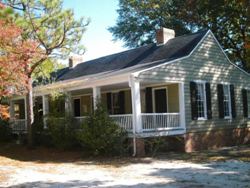 1820 as a cottage that had two small back rooms, two large front rooms, and a small back porch.

The Seminary purchased the Gross cottage in 1834 and enlarged it to eight rooms.  While it was located in Lexington, it was used as the residence of the headmaster, who was Ernest L. Hazelius from 1834 until his death in 1853.  Hazelius was a minister/theologian, author, educator, friend of European royalty, and a champion of public education.  He had previously taught at the seminary in Gettysburg, Pennsylvania.

The house had four front doors for access to the porch.  These rooms served as parlor, dining room, master bedroom, and office.  The back bedrooms were for guests who often stayed with the good doctor and his wife, who never had any children.  The large windows and numerous doors were for ventilation.  The mantels in the house were painted to look like marble.  In one corner, one can see where Federal troops attempted to set fire to the house in 1865.

Following the move of the seminary to Newberry in 1855, the Hazelius House was eventually sold to the Leaphart family, who owned the house until donating it to the Museum in 1974.  The house is also famous for being the location where evangelist Charlie D. Tillman wrote down the spiritual “Give Me That Old Time Religion” while visiting Lexington in 1889. 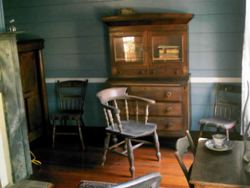