The two buildings attached to the rear of the John Fox House were originally used as slave quarters; they probably were located northeast of the house on property that is now part of the Lexington Paint and Supply business (as of 2010). 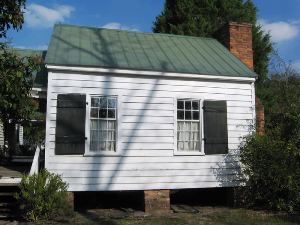 The building on the north side of the house (now interpreted as a slave cabin) was moved to its present location and attached to the rear of the Fox House sometime after the Civil War.  It was then used as a kitchen for the Fox family.  After being used as a kitchen, it was remodeled in the 1940s or 1950s and used as an insurance office.  When the Fox House became a museum in 1970, it was used as the first museum office.

The cabin on the south side was moved from a point approximately 100 feet northeast of the Fox House and attached to the rear of the house in 1969 by Lee Gandee, who led the restoration of the Fox House.  That cabin was then interpreted as a kitchen due to the museum not having a separate kitchen to interpret at that time. 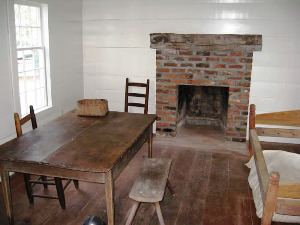 Both cabins are 12’ x 14’ of frame construction.  Between four and seven slaves lived in each.  Based on the construction techniques and other attributes, the structures probably were built in the 1850s. Although many plantation/farm owners constructed slave cabins out of logs, building frame houses for them became popular in the 1830s and 1840s.  This may have been due to concern for the slaves’ health and/or to show off the wealth of the plantation owner.  The latter also may have motivated some plantation owners to paint or whitewash the slave quarters as well.

Although an exact list of what the Fox slaves had inside their quarters does not exist, descriptions of furnishings from other plantations in South Carolina and around the South do survive.  Slaves usually slept on pallets (straw mattresses), although rope beds became popular in the 1800’s.  The small quarters may have included furniture constructed on the plantation or items passed down from the plantation house.

John Fox had fifty-two slaves in 1860, around fifteen of which probably worked at his homestead on what is now Fox Street.  The rest worked at his plantation on Old Chapin Road.