When it rains in urban areas storm water hits hard surfaces such as paved parking lots, 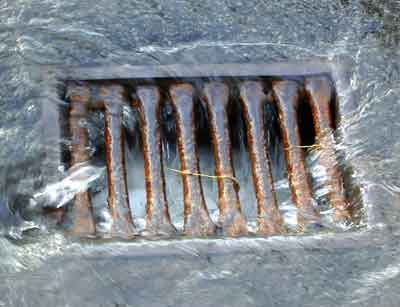 rooftops and roadways instead of soaking into the ground naturally. The storm water picks up oils, grease, pesticides, fertilizers and even bacteria and viruses from pet waste on its way to the storm drainage system.

Storm water that enters the County’s storm drainage system is not treated at a wastewater treatment facility. Instead it empties directly into creeks, rivers, wetlands and streams, depositing any pollutants picked up along the way.

According to the United States Environmental Protection Agency (EPA), pollution found in storm water runoff (also referred to as "nonpoint source pollution") is the biggest threat to the quality of the nation’s waterways.

The Stormwater Management Ordinance prohibits illegally dumping, throwing, discharging, or allowing the entrance of substances other than storm water into the County’s storm drainage system or right-of-way.  Harmful substances which enter the storm water system are considered illicit discharges. Items such as trash, yard debris and sediment from construction sites are also considered illicit and are prohibited from dumping in the storm drain system or public right-of-way.  Illicit discharges have the potential to cause excessive harm to the environment and private property due to flooding.

REPORT POTENTIAL ILLICIT DISCHARGES BY CALLING 803-785-8121 OR COMPLETING THE STORMWATER COMPLAINT FORM AND FORWARDING TO THE LAND DEVELOPMENT DIVISION.